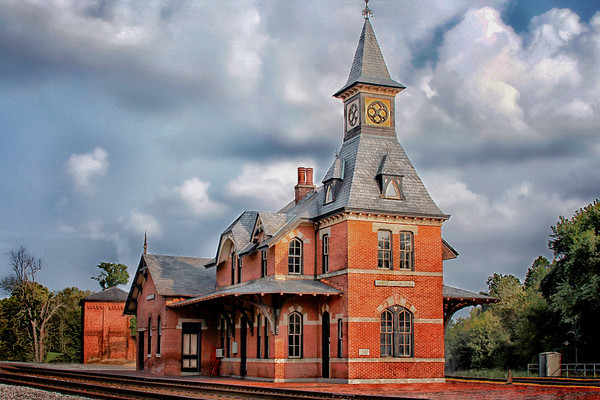 The Point of Rocks Railroad Station is a historic passenger rail station on the MARC Brunswick Line between Washington, D.C. and Martinsburg, WV located at Point of Rocks, Frederick County, Maryland, United States. The station was built by the Baltimore and Ohio Railroad in 1873, and designed by E. Francis Baldwin. It is situated at the junction of the B&O Old Main Line (running to Baltimore) and the Metropolitan Branch (running to Washington, D.C.). The Met Branch also opened in 1873 and became the principal route for passenger trains between Baltimore, Washington and points west.

The main station building is a 2 1⁄2-story, triangular Gothic Revival with a four-story tower and a 1 1⁄2-story wing at the base. The tower has a pyramidal roof containing a dormer on each side. On top is a square cupola supporting a pyramidal peaked roof.

The station building itself is not open to the public and is used by CSX as storage and offices for maintenance of way crews. In 2008, new platforms and platform shelters were built for MARC commuters traveling east towards Washington DC, replacing older bus shelter–style structures which were erected in the mid 90's.

During the blizzard of 2010, the south side awning on the main building collapsed under the weight of record snow fall, and was later removed leaving half the building missing cover. In January 2011, work to rebuild the destroyed part of the structure began.